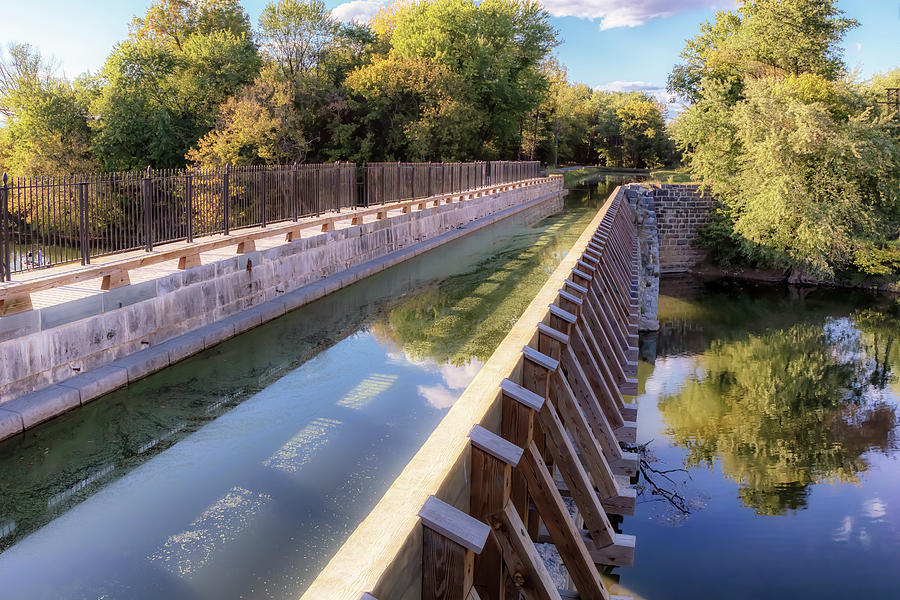 Atop the Conococheague Aqueduct

Atop the Conococheague Aqueduct

Looking down the historic Conococheague Aqueduct in Williamsport, Maryland. You can see the Conococheague Creek below. This is the second largest of the eleven aqueducts along the 184 miles long C&O Canal. The aqueduct, restored in 2017, is watered and fully operational, allowing a canal boat to pass through; it is one of only two places in the United States that you can take a ride through an aqueduct.

It originally cost $43,283.78 when initially constructed from local limestone in 1835. As a boatman would say, the "wall has gone out" several times. It was damaged during the Civil War when Moby's Raiders took it out. In 1920, Captain Myers returned to Williamsport after dropping off a coal load in Cumberland. Boat #73 bumped the wall, and he saw the aqueduct wall shutter. Myers had time to yell for them to release the mules before the wall started to collapse; he was able to jump to safety as the boat fell through the break and into the creek. After being repaired once again, the flood of 1924 destroyed it, but the C&O Canal Company was no longer in business. The aqueduct sat in disrepair until the most recent restoration work in 2017.

The Conococheague Aqueduct is just off the Cushwa Basin on the right side. It is part of the Chesapeake & Ohio Canal National Historical Park.