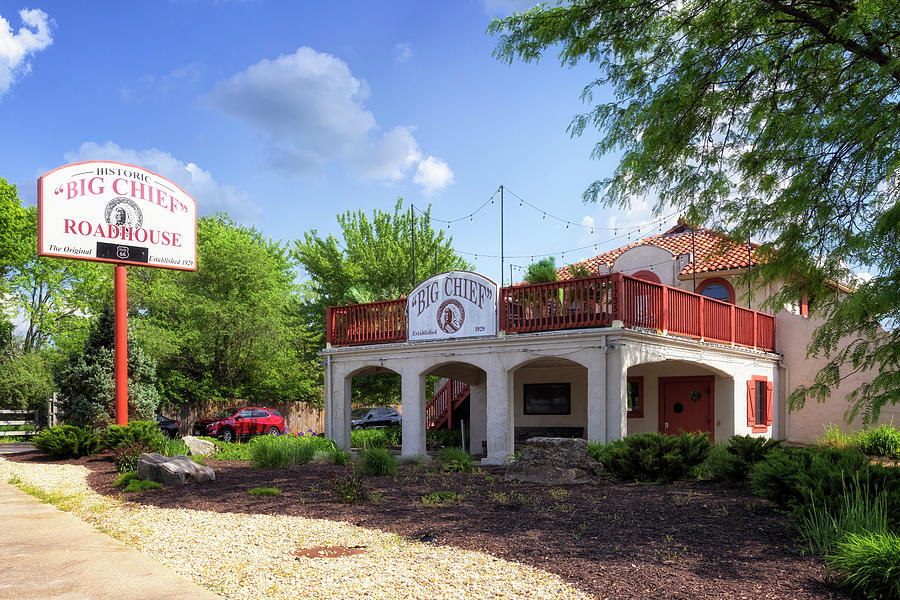 The history of Big Chief Roadhouse dates back to 1929. Located in Wildwood, Missouri, on the original 1926 to 1932 alignment of Route 66, it was part of the Big Chief Highway Hotel built by William Clay Pierce of Pierce-Pennant Oil Company to serve transcontinental travelers along Route 66. Pierce’s vision was to construct self-contained stopping points from Chicago to LA.

Known for its distinctive Spanish Mission Revival style, the Big Chief Hotel was not a hotel, but a tourist cabin court, the latest thing in roadside lodging. The Big Chief is notable because it was one of the earliest cabin courts in Missouri. It was also the largest, with 62 individual cabins, and every place had a garage. In 1935, the state only had nine courts with more than 30 cabins, and the Big Chief was double that in size! The hotel also offered an elaborate and elegant full-service dining experience.

Advertising both hot and cold running shower baths, the Big Chief had a large playground for the kids, a Conoco service station out front, and a convenience store to buy groceries. It cost $1.50 to spend the night in a cabin, 75 cents for a steak dinner, and the special plate lunch was just 40 cents. In the evenings, they pushed the dining room tables back for dancing.

The Big Chief was a popular family destination since the individual cabins appealed to large families traveling together. Still, its uniqueness is said to have also attracted people like the infamous Al Capone and baseball great Babe Ruth.

It reopened as a full-service restaurant after being restored in the early 1990s. Place on the National Register of Historic Places in 2003 for its important part in Missouri Route 66 history, the Big Chief Roadhouse is one of the few surviving full-service Route 66 restaurants left in the state.