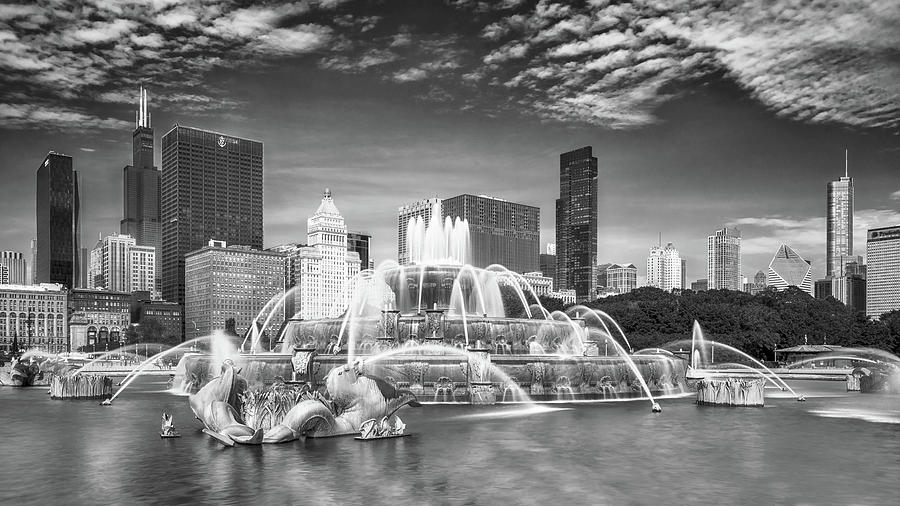 The Clarence Buckingham Memorial Fountain, commonly known as just the Buckingham Fountain in Chicago, Illinois, is one of the largest fountains in the world. Officially opening to the public in the spring of 1927, it is the centerpiece of Grant Park. A crowd of 50,000 people attended the dedication later that summer when John Philip Sousa conducted the band that played “Pomp and Circumstance” as the fountain circulated through its fantastic water display.

In the early 1920s, architect Edward Bennett proposed plans for Grant Park, envisioning a monumental fountain as the park’s focal point. One million dollars was donated by philanthropist and art patron Kate Sturges Buckingham to dedicate the fountain to her brother.

The monument, inspired by the Latona Basin at Versailles, was a design collaboration of the architect Edward Bennett, French sculptor Marcel Francois Loyau and engineer Jacques H Lambert. Designed to symbolize the vastness of Lake Michigan, it is twice the size of the fountain at Versailles. The structure comprises four basins of elaborately carved granite and pink Georgia marble. It recirculates approximately 15,000 gallons of water per minute, shooting sprays of water up to 150 feet in the air. In addition, the lower basin features four sets of Art Deco-styled sea horses honoring the four states that border Lake Michigan.

Amazingly, the fountain was manually operated by two stationary engineers, each working a twelve-hour shift until 1980, when it was fully automated.