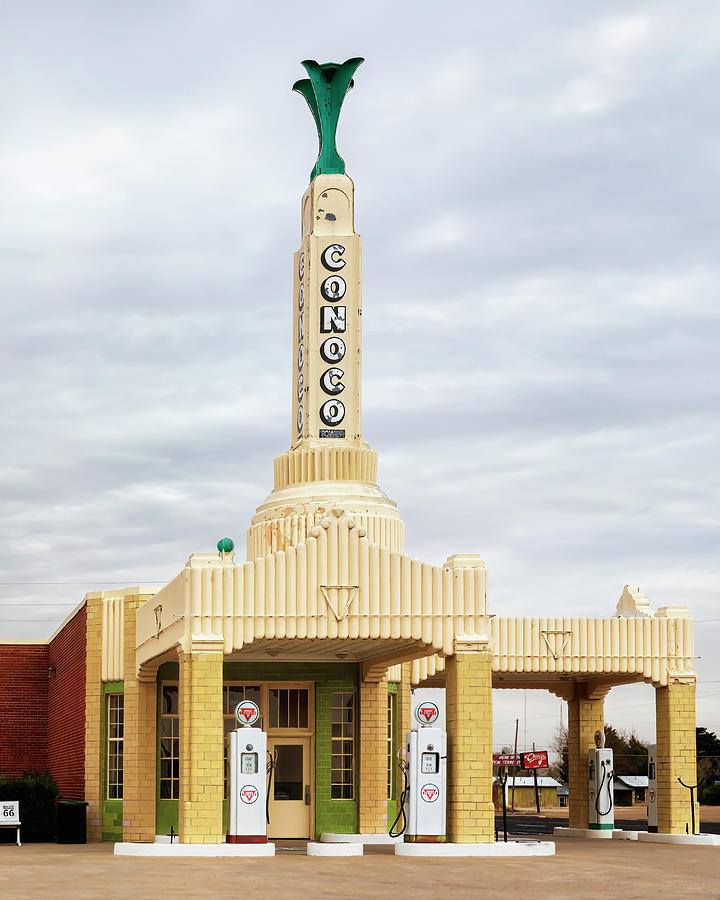 Located at the corner of historic Route 66 and US Highway 84 in Shamrock, Texas, is the iconic Conoco Tower Station and U Drop Inn Cafe. This magnificent Art Deco structure is one of the most imposing and architecturally creative buildings along the entire length of Route 66.

The building, constructed in 1936 for $23,000, was born from a sketch made with a nail in the dirt. It was the only business in town right on the Mother Road when Route 66 came through a year later. Business boomed. The service station, dominated by the 100-foot obelisk advertising Conoco, was visible from long distances during the day and at night; the building, decked in neon, glowed like a beacon to weary travelers.

The service station was quickly nicknamed the Tower Station because of its imposing tower, while the diner was named the U Drop Inn by an 8-year-old boy who won the business naming contest. It was the only roadside restaurant for hundreds of miles in either direction when Route 66 first came through. The building was initially designed to be three separate structures: a gas station, diner, and retail space, but the restaurant was so popular that the retail store became an overflow seating area for the café instead.

Added to the National Register of Historic Places in 1997, the Tower Station is significant as an excellent example of "Streamline Moderne," an offshoot of late Art Deco architecture. The building features glazed brick, which includes a "zigzag" motif. In addition, it has strong vertical elements and decorative sculptures such as the metal "tulip" atop the largest tower. It is extremely rare to see this level of sophistication in a small-town gas station or roadside restaurant.

Today, the City of Shamrock owns the building. It houses a visitor’s center, chamber of commerce office, and community center. The restaurant is open for business again, as well. So stop in for a meal or ice cream at the U Drop Inn.