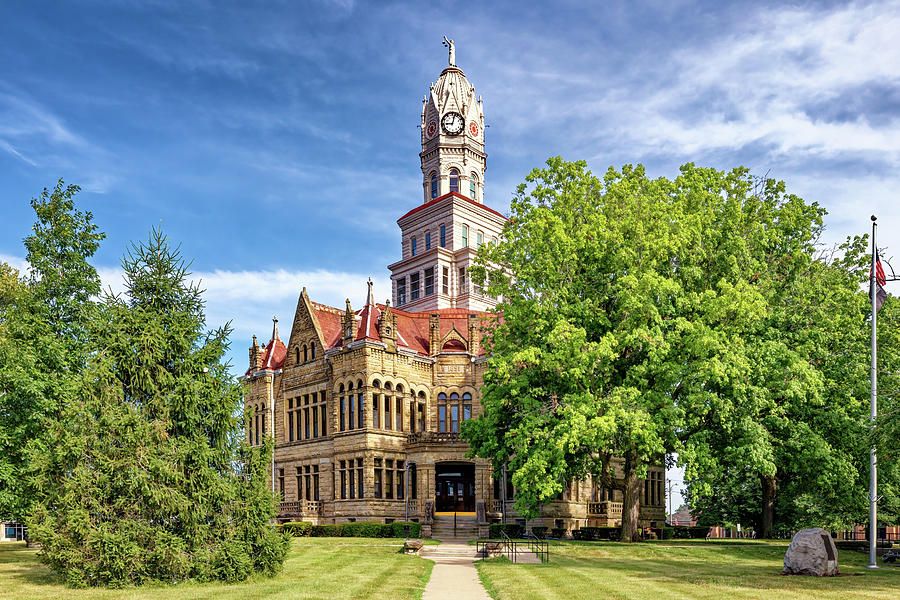 The current Edgar County Courthouse is the third courthouse to be built on this site. Already over 100 years old, the octagonal building has entrances at all four corners and a wedding cake clock tower topped with a female statue holding the scales of Justice. Lady Justice faces west since the hope and future of our country was to expand westward at the time. The four-faced clock tower rises 150 feet into the air, making it a focal point of the small town of Paris. It was said to be visible for miles when the courthouse was constructed.
Designed in the Romanesque architectural style by Chicago architect Henry Elliot, construction began in 1891 and was completed in 1893, costing $104,801. The building, complete with turrets, arches, and towers, combines blue Amherst stone and steel and is considered the largest and most ornate example of Elliot's work in the state.

Over the years, the scales have blown out of Lady Justice's hand several times, and some brave soul had to climb up the courthouse to put them back. Thankfully, the last time the scales needed to be replaced, they were carefully lowered onto the statue's hand by helicopter.

The courthouse was placed on the National Register of Historic Places in 1981.