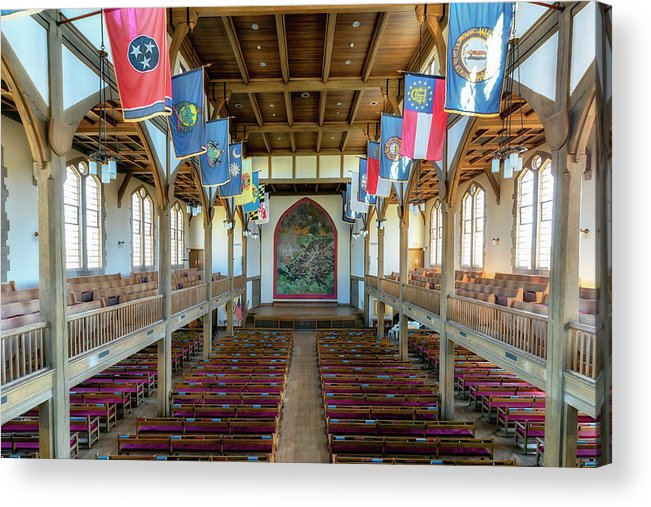 Jackson Memorial Hall - Virginia Military Institute acrylic print by Susan Rissi Tregoning.   Bring your artwork to life with the stylish lines and added depth of an acrylic print. Your image gets printed directly onto the back of a 1/4" thick sheet of clear acrylic. The high gloss of the acrylic sheet complements the rich colors of any image to produce stunning results. Two different mounting options are available, see below.

A view from the balcony at Jackson Memorial Hall, also known as Cadet Chapel at the Virginia Military Institute (VMI) in Lexington, Virginia.... more

A view from the balcony at Jackson Memorial Hall, also known as Cadet Chapel at the Virginia Military Institute (VMI) in Lexington, Virginia. This 1,000 seat auditorium is now too small to hold the entire Corps, but it continues to be used for many events, lectures, and speeches. The 26 state flags hanging in the Hall represent the states that were part of the Union when VMI was founded in 1839. The 18 x 23 feet painting at the front of the Chapel depicts the charge of the VMI Corps of Cadets in the 1864 Battle of New Market. It was painted by artist Benjamin West Clinedinst (VMI Class of 1880), to honor the 10 VMI cadets that died that day. The second Jackson Memorial Hall it was built in 1915 with $100,000 from the government for damages done during the Civil War. It replaced the original 1896 building. The building also contains the VMI Museum, which was founded in 1856, making it the oldest museum in the state of Virginia. Copyright 2020 Susan Rissi Tregoning

I'm a travel photographer that enjoys photographing United States architecture, nature, and transportation. As the 8th photographer in 4 generations of my family, I don't remember a time when photography was not part of my life. By the time I was five years old, I was standing on a stool in the darkroom, helping my dad develop pictures. It was my job to transfer the photos from the hypo to the water bath. I went to college for interior design. After I graduated, I had a long successful career as an art buyer and designer for a large home furnishings company. In 2006, I had a significant life change. My husband became a medical traveler, and I decided to put my career on hold to tag along. In the process, I found my roots again. What...