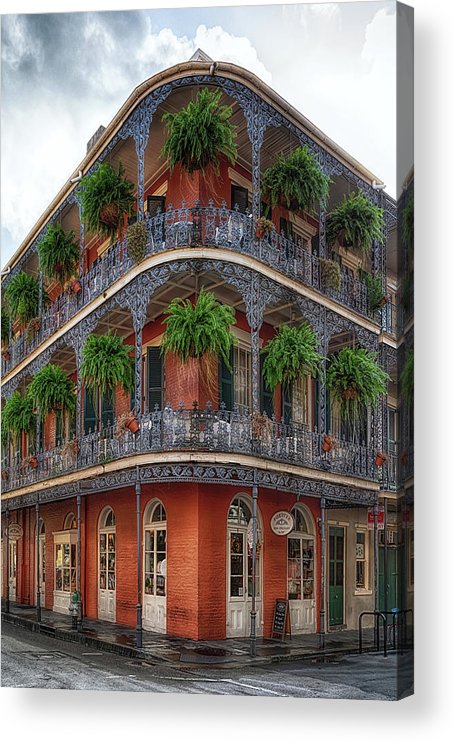 LaBranche House acrylic print by Susan Rissi Tregoning.   Bring your artwork to life with the stylish lines and added depth of an acrylic print. Your image gets printed directly onto the back of a 1/4" thick sheet of clear acrylic. The high gloss of the acrylic sheet complements the rich colors of any image to produce stunning results. Two different mounting options are available, see below.

The LaBranche House on the corner of St. Peter and Royal Street is famous for having some of the most beautiful iron balconies in the French Quarter... more

The LaBranche House on the corner of St. Peter and Royal Street is famous for having some of the most beautiful iron balconies in the French Quarter of New Orleans, Louisiana. Jean Baptiste LaBranche began construction of the house in 1835, but died before its completion in 1838. There are claims that the house is haunted. According to the legend… Mr. LaBranche was said to have had a secret mistress named Melissa, and after his death, his widow found out. After inviting the mistress over for tea, Mrs. LaBranche drugged Melissa and chained her up on the third floor, leaving her to slowly starve to death. It wasn’t until 15 years later when Mrs. LaBranche finally passed away that Melissa’s body was found. The ghosts of both women are said to haunt this building; Melissa making restless movements on the 2nd and 3rd floor, and Mrs. LaBranche, is seen in a blue gown on the second.Copyright 2018 Susan Rissi Tregoning