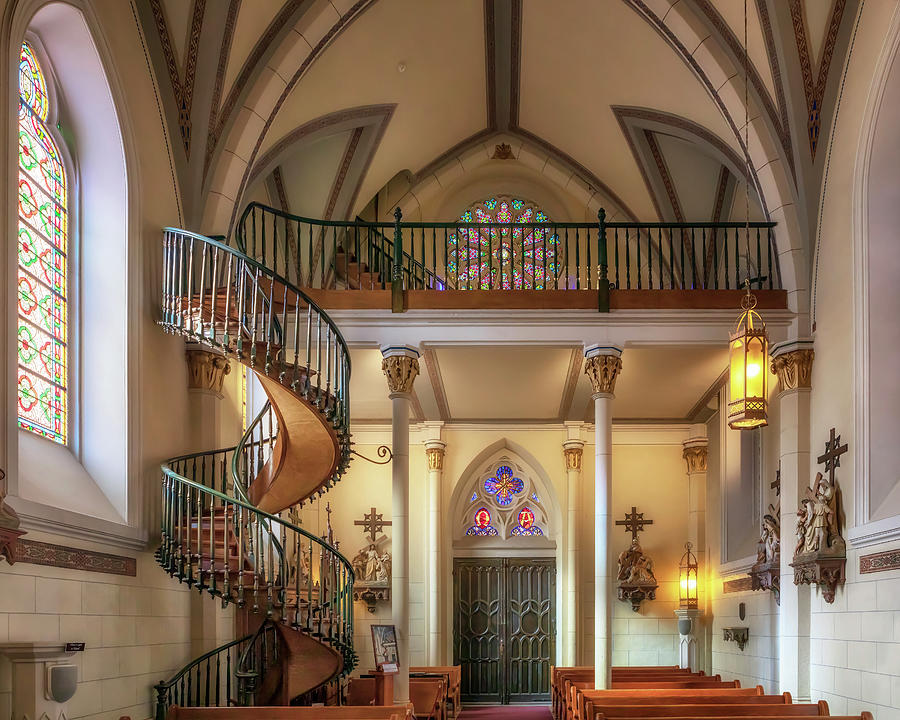 A trip to Santa Fe, New Mexico, is incomplete without visiting the Loretto Chapel, home of the Miraculous Staircase.

The Sisters of Loretto commissioned the Chapel for the Loretto Academy, their all-girls school, in 1873. The Gothic-Revival Chapel, completed in 1878, was modeled after Sainte Chapelle in Paris, France. Built with locally quarried sandstone, the elaborate spires, flying buttresses, and stained glass windows were imported from France. The most fascinating feature of the church is its Miraculous Staircase.

The Chapel was almost completed when the architect, Projectus Mouly, died before designing a staircase to the choir loft. Experts were called in. They all recommended a ladder as the best solution to scale the twenty-two feet since the Chapel was too small and narrow for a staircase.

The Sisters did not consider this an acceptable solution for their beautiful Chapel. For nine days, they prayed a novena to Saint Joseph, the Patron Saint of Carpenters and Workers. Then, on the last day, a man riding a donkey carrying a simple box of woodworking tools appeared at the church looking for work. The Sisters hired him to complete the staircase, agreeing to his stipulation that no one enter the church or watch him work. When it was complete, he vanished without a trace, without being paid.

The construction of the staircase is unique. Said not to be built from locally sourced wood or even wood native to the area, the staircase design, a double helix, has two 360-degree turns floating in mid-air. Made with hand tools, when wooden pegs were used for nails, the staircase has 33 steps, Jesus’s age with he was crucified. The hand railing was added several years later as a safety precaution.

The church was used daily until the Academy closed in 1968. It is now a museum and wedding venue. It is part of Santa Fe’s Historic District and is on the New Mexico State Register of Cultural Properties.