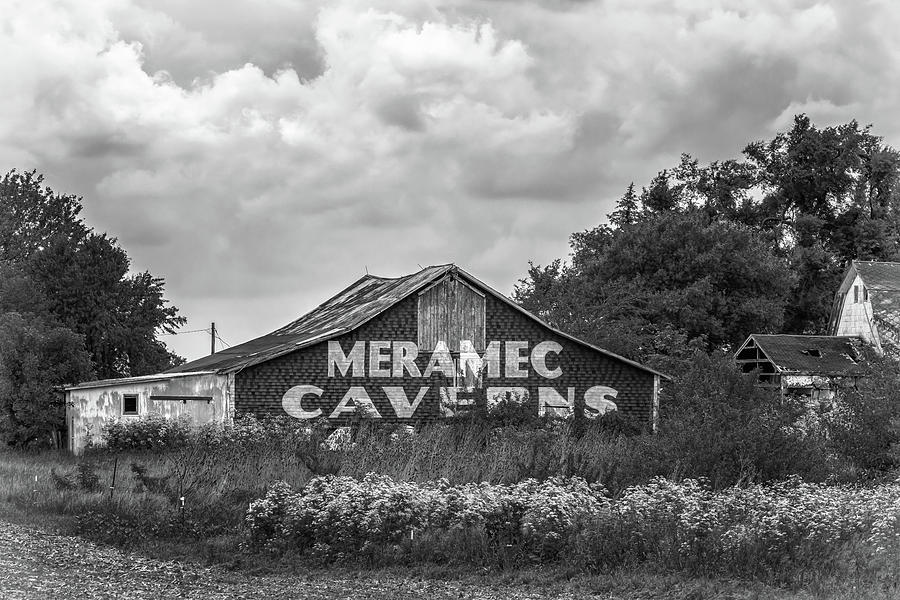 The storm clouds roll over the nostalgic Meramec Caverns Barn on Route 66 in Cayuga, Illinois.

Meramec Caverns in Staunton, Missouri, is one of the most advertised places in the Midwest. When it first opened as a tourist attraction in 1935, Lester Dill looking for new forms of advertising, had the idea of painting barns for free in exchange for being allowed to paint a Meramec Caverns logo on the roof or side. Most farmers were thrilled just to get the free labor and paint, but for prime roadside real estate watches, whiskey, and tickets for the cave tour were sometimes offered as payment.

Dill started traveling the country painting barns, and in 1956, Jim Gauer continued the work, painting barns for almost 50 years. Dill liked to keep his Meramec Caverns barns looking nice, sending painters to update the billboards and carpenters to fix problems with the structures. He even went so far as to change a wood shingle roof to a metal one for a farmer.

Barn rooftop advertising was outlawed in 1968, but the older Meramec Caverns ads were grandfathered in. Allowing them to be repainted until the roof comes down from either a disaster or age. Once that happens, the billboard cannot be replaced.

The Cayuga, Illinois, Meramec Caverns barn is one of only four remaining on historic Route 66. The other three are in Conway, Missouri, St Clair, Missouri, and Chandler, Oklahoma.