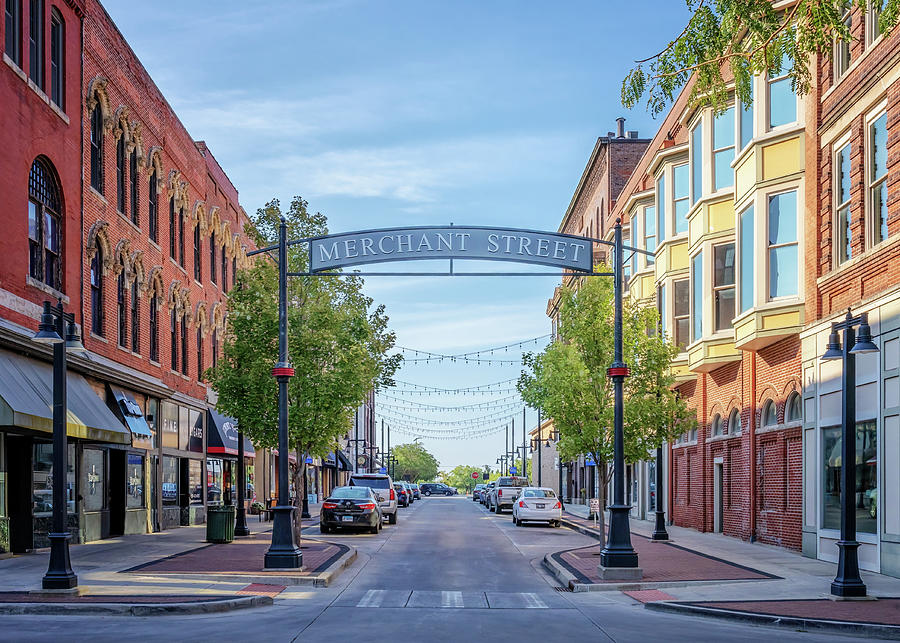 Merchant Street hasn’t changed much since the early 1860s. Franklin Priest, who was responsible for much of the development of downtown Decatur, owned the land that would eventually become Merchant Street. In 1857, Priest offered it to the city of Decatur, stipulating that they plank the street with wood. Considering that every other street in town at the time was dirt or mud in inclement weather, it was something to say your business was on Merchant Street. Mr. Priest was elected mayor in 1865.

The new street was first known as Bank Street since the Railroad Bank was the first business to open here, and stores rapidly followed suit. At one time, three grocery stores were operating simultaneously in this little stretch of downtown, and in 1869 even the Post Office was there. Back in Abraham Lincoln’s day, he was a frequent visitor to Merchant Street, traversing this street to get to the Macon County Courthouse that was once located at the far end of the street from the arch.

The Central Block on the east side of the street (the right side of the image) was where tents were set up for traveling medicine shows, revivals, and the like. Once buildings were constructed, this side of the street had a wider sidewalk with metal doors that could be opened so deliveries could be made directly to the basement without entering the businesses.

Once the Railroad Bank closed, James Millikin, the founder of Millikin University, took over the building, and it became the Millikin National Bank of Decatur. Unfortunately, that building no longer stands, it was destroyed by fire in 1909, but you can see the commemorative plaque on the building that replaced it right next to Del’s Popcorn Shop.

In 1914, Merchant Street was paved with brick. In the 1930s and 40s, Merchant Street at night was a rough place with prostitutes in some upper units and illegal gambling. It was often raided by the police.

Del’s Popcorn Shop is the oldest continuously operating business on Merchant Street. Using much of the original equipment in the store to make their confections, Del’s could be considered a museum that remains open for business.

Merchant Street is part of the Decatur Downtown Historic District.