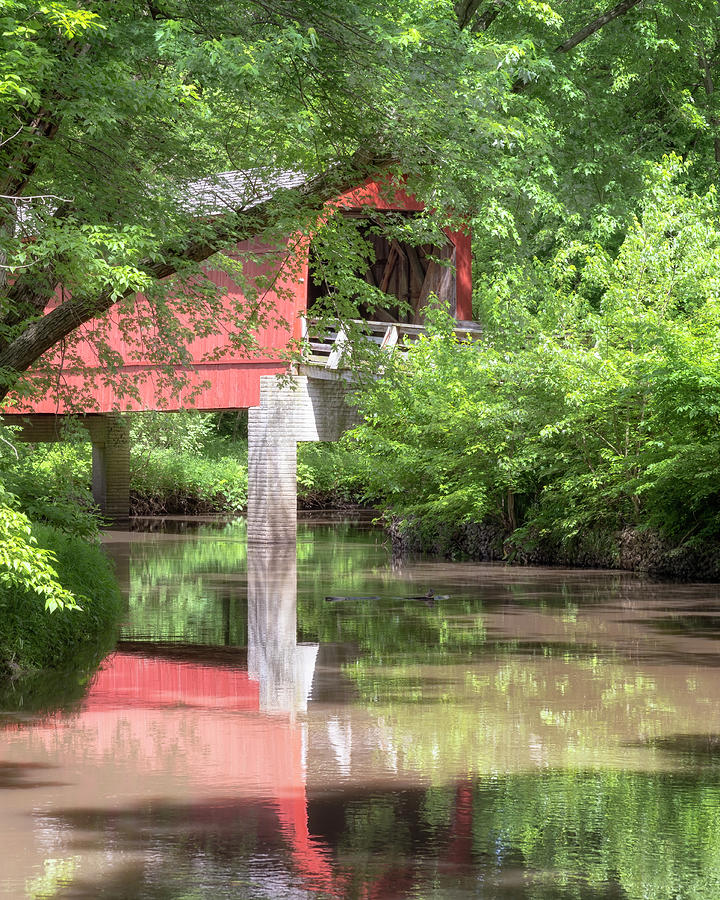 Sugar Creek Covered Bridge - Down on the Sugar Creek

Sugar Creek Covered Bridge - Down on the Sugar Creek

Just a peek of the historic Sugar Creek Covered Bridge hidden among the dense trees and reflecting in the water of the Sugar Creek.

Located in Chatham Park District's Pioneer Park just outside Springfield, Illinois, the Sugar Creek Covered Bridge is also known as Headley Covered Bridge and the Glenarm Covered Bridge. Pioneer Park honors the first settlers to Sangamon County, one of which was Robert Pulliam, who built his cabin just a few hundred yards south of the park location in 1817.

Local folklore says that early settler Thomas Black, who operated a nearby mill and tavern, built the first bridge in 1827, but no documentation can be found to substantiate that claim. He is also credited with building a bridge here in 1880. While it is known that a bridge was located here before the covered bridge, the amount of time between these two stories makes it questionable that Mr. Black could have been involved in the building of both of them.

A local historian has located a newspaper showing that the county paid contractors $48 for bridge repairs in 1845. Other newspapers show that county bids were sought to enclose and repair the bridge two different times in 1854 and 1860. Finally the truth came out in 1972 when the National Society for the Preservation of Covered Bridges surveyed the bridge and dated it to 1880. In that research, the bridge was identified as Headley Bridge since James Headley owned the adjacent property during the 1880s.

Placed on the National Register of Historic Places in 1978, the bridge was open to vehicular traffic until 1984. It is the last covered bridge in Sangamon County and one of only nine authentic covered bridges left in Illinois. In addition, it is one of the state’s five covered bridges that are historic because of both their construction and age. It is just off historic Route 66.