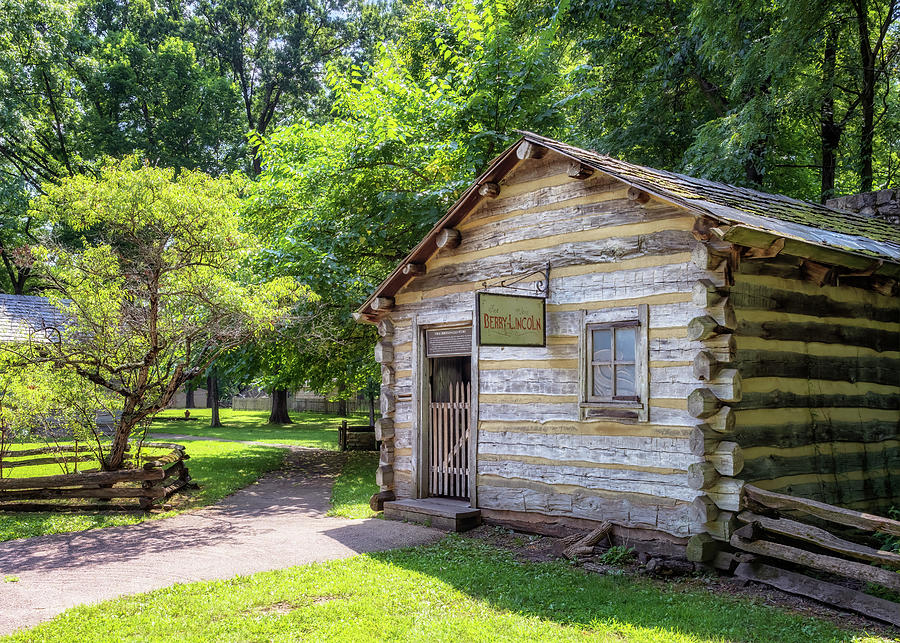 Located next to the store within a fence to protect it is a very rare and fragile Wildgoose Plum Tree (prunus munsoniana). It was most likely planted during the 1930's recreation of the village and was named a US National Champion tree in 1989. The tree was damaged in a tornado and nearly destroyed but after ten years of loving care came back. It now has an offspring next to it.

Twenty-one-year-old Abraham Lincoln moved with his extended family to Macon County, Illinois, in March 1830, helping his father establish a farm. That following spring, in 1831, he set out on his own, moving to New Salem, Illinois.

The village, known today as Lincoln's New Salem State Historic Site, is a reconstructed frontier village that would have been lost to history if not for Abraham Lincoln.

New Salem, founded in 1829 near a mill on the Sangamon River, had a population of around 25 families at its zenith. When Petersburg, just a few miles away, was named the Menard County Seat in 1839, most families moved there or left town. The village was entirely abandoned by 1840.

Lincoln spent seven years in New Salem during the village's best years as a commercial center, from 1831-1837, before moving on to Springfield to begin his career in law. While in New Salem, he first clerked for Denton Offutt before buying interest in a general store a year later with his partner, William Berry. Named the Berry-Lincoln store, Lincoln became a shopkeeper. They later moved the store to a larger town building shortly after the business failed. Lincoln also allegedly met his first love in New Salem, Ann Rutledge, who died of Typhoid in 1835 at 22.

Area farmers brought their corn to town for grinding at the mill, purchased goods and services at the Berry-Lincoln General Store they could not provide themselves, and socialized with Lincoln at stores/taverns and political, social, and religious gatherings.