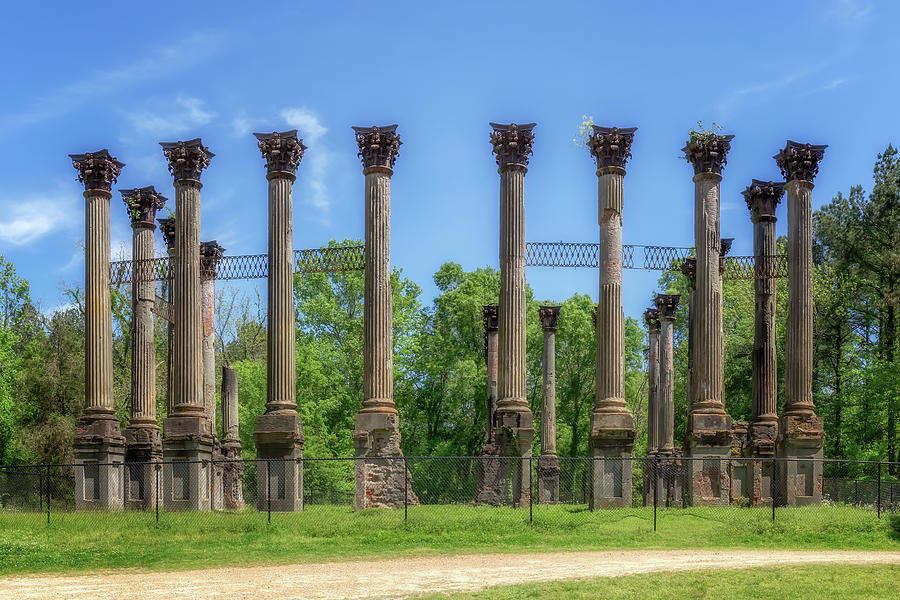 Twenty-three standing Corinthian columns are all that remains of the Windsor mansion. At 17,000 square feet, it was the largest antebellum Greek Revival mansion ever built in the state of Mississippi. Initially built for Smith Coffee Daniell II, a wealthy cotton planter, he died at 34 just weeks after the mansion was completed. It cost about $175,000 or $4,879,907 today to build. Mostly constructed by Daniell’s slaves, a crew of skilled artisans from Mississippi, northeastern states, and Europe was hired to do the finishing work.

The mansion stood from 1861 to 1890 when it was destroyed by a fire that started on the third floor when a guest dropped ashes from a cigarette or cigar into construction debris left by carpenters who were making repairs. All that was left were the columns, balustrades, cast iron stairways, and a few pieces of bone china.

For over 100 years, not much was known about the appearance of the mansion. Then in the early 1990s, an 1863 sketch of the mansion was discovered in the papers of a Union officer. Historians believe that Henry Dwight sketched it while his unit was encamped on the grounds.

The Windsor Ruins were added to the National Register of Historic Places in 1971 and was designated a Mississippi Landmark in 1985.