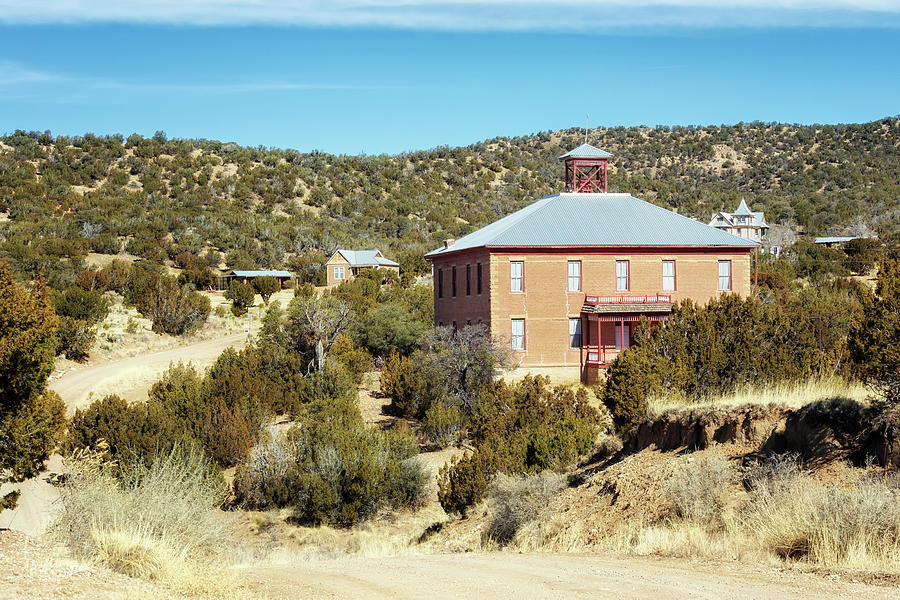 A hilly dirt road curves down and around the White Oaks Schoolhouse as it heads though town in the ghost town of White Oaks, New Mexico.

Completed in 1894, this School is one of the finest examples of an Eastern-influenced four-room brick schoolhouse in New Mexico today. It was one of the last buildings to be constructed in White Oaks. The School was most likely paid for with municipal bonds and contracted prior to the disastrous railroad meeting when the people of White Oaks discovered they had lost out on the railroad right of way. The railroad would pass through Carrizozo, twelve miles away, instead. Since the mines were mined out, this was the beginning of the end for White Oak. The School was shut down in 1905, less than 11 years after construction, for lack of funds.

The White Oaks School structure looks much like it did when built. Now state-owned, the local historical society maintains the School as a museum.

Today White Oaks, New Mexico, is a ghost town, but it was once the second-largest and liveliest town in New Mexico Territory. The favorite haunt of Billy the Kid and Lincoln County Sheriff Pat Garrett, who liked to hang out in the saloons and gambling parlors filled with gold mine roughnecks and prostitutes.