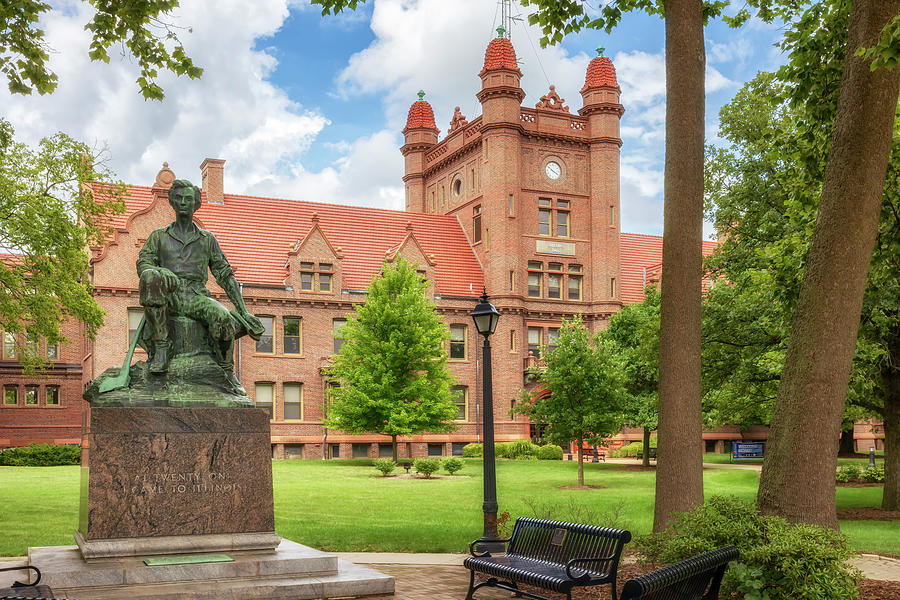 A statue of a young Abraham Lincoln sits in front of Shilling Hall at Millikin University in Decatur, Illinois, as a tribute to his first home in Illinois. The base is inscribed, "At twenty-one, I came to Illinois."

Shortly after Abraham Lincoln's twenty-first birthday, in the spring of 1830, he joined his father in traveling from Indiana to the newly formed Macon County, Illinois. The two of them built a cabin for the Lincoln family about eight miles from Decatur in the area known today as the Lincoln Trail Homestead State Park. Lincoln continued to live with his family for almost a year before striking out on his own, moving to New Salem, Illinois. By then, he had already given his first political speech at the site of Lincoln Square in downtown Decatur.

Lincoln was known to return to Decatur several more times. Most importantly, he was in Decatur for the Republican convention in 1860 to accept the Republican endorsement for President. He earned the nickname "Rail Splitter" at that convention. His last known visit was in February 1861, when his train stopped briefly en route to Washington, DC, for his inauguration. He had just enough time to greet the large crowd and shake hands with some of the more important Decatur supporters, one of which was James Millikin.

Several locations around Decatur were considered for the statue's placement. However, it was finally decided that the area on campus was perfect since Main Street/Route 36 was the road Lincoln would have traveled between Springfield and Decatur each time he visited.

The statue was sculpted by Fred Torrey and dedicated in October of 1948.