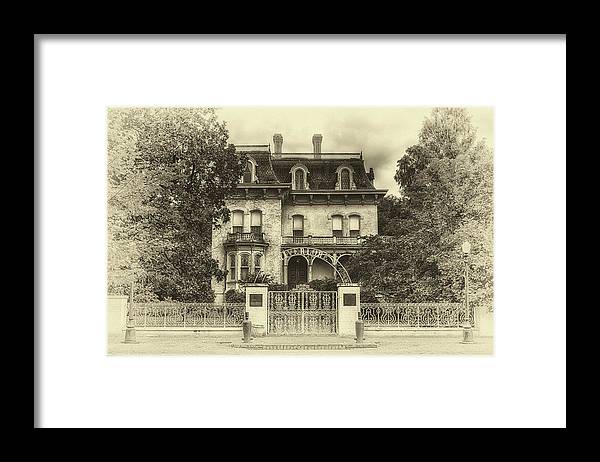 Riverlore in Black and White framed print by Susan Rissi Tregoning.   Bring your print to life with hundreds of different frame and mat combinations. Our framed prints are assembled, packaged, and shipped by our expert framing staff and delivered "ready to hang" with pre-attached hanging wire, mounting hooks, and nails.

Located in Cairo, Illinois, Riverlore is a stately white French Second Empire Style Mansion in the residential section of town that was once known as... more

Located in Cairo, Illinois, Riverlore is a stately white French Second Empire Style Mansion in the residential section of town that was once known as "Millionaire's Row". This 11 room brick home was built in 1865 by Captain William Parker Halliday, a prominent Cairo businessman and riverboat captain. Captain Halliday resided at his beloved Riverlore for some 34 years. The grounds cover 3/4 of an acre and with its exquisitely maintained, landscaped grounds complete with magnolias, flowering trees, shrubs and a 100 year old Gingko tree, it is by far the most picturesque mansion in the Cairo community. Originally the mansion covered the entire City block, but portions were sold over time.Copyright 2018 Susan Rissi Tregoning