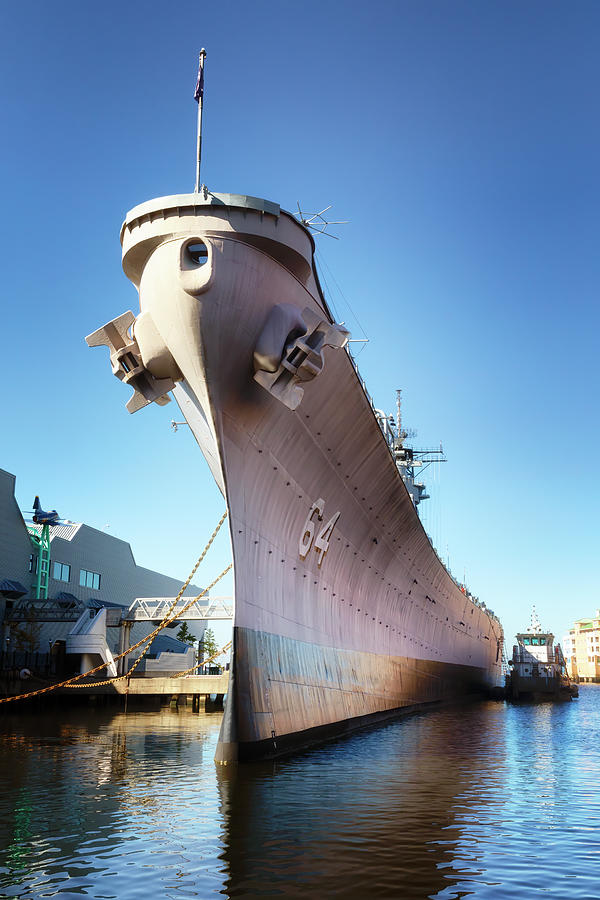 Berthed beside Nauticus Maritime Center on the Norfolk, Virginia waterfront, the Iowa-class Battleship Wisconsin (BB-64) is one of the largest and last battleships built by the United States Navy. Launched on December 7, 1943, decommissioned for its third and final time on September 30, 1991, it is now open for public tours and one of Norfolk's most significant landmarks.

Featuring a slender hull below the waterline and a distinctive bulbous bow, the USS Wisconsin moved through the water at speeds exceeding 33 knots, making her swift sailing and challenging to stop.

One foggy afternoon in 1956, just off Hampton Roads, USS Wisconsin collided with the escorting destroyer, USS Eaton. Wisconsin, with its mangled bow, returned to the Norfolk shipyard for repairs. Naval Shipyard workers removed the bow from the unfinished Battleship Kentucky, fitting a 120-ton section to Wisconsin's hull. The bullnose is original to Wisconsin, while a 68' section from the bow back to the aft is from Kentucky.

When the Navy first commissioned the USS Wisconsin, crew members affectionately began calling her, Wisky. However, one story claims the nickname came after the accident and combines the two Battleship's names WIS for Wisconsin + KY for Kentucky seems entirely believable.